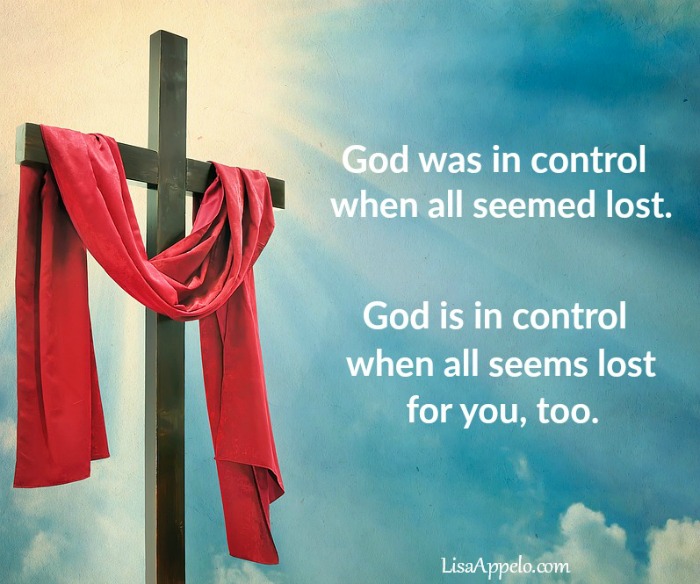 On the good days, it’s easy to say that God is in control. We look around with a happy sigh and agree with God that He is ruling well. Life has a good hum, an easy rhythm.

But then there are the other days. Days of dashed hopes and spiraling circumstances.

I remember one season when we felt much like the little boy who plugged the leak by putting his finger in the dike only to find other leaks began to spring as he ran out of fingers to plug them.

We had four children under five and we were for the first time depending only on Dan’s salary. Trying to make some extra income, we’d taken on three small rental houses.

First an air conditioner condenser needed replacing. Then a pool pump gave out. A tenant stopped paying. One of the houses flooded. It was problem after problem and it drained every bit of our energy and all of our cash reserves — and then some.

Those hard days now seem easy compared to harder days that have come. But then, we couldn’t see the end and it felt very out of control.

Maybe you have your own hard days? A diagnosis. A child. A job search. A season.

On that first Holy Saturday, in the wake of the turmoil of Friday’s events, I wonder whether the disciples wrestled with God’s goodness.

Did they question whether God was in control?

Jesus had been arrested. He’d been tried and mocked and beaten.

And then — unimaginably — Jesus – who had fed 5,000 from a few fish and loaves, who had spit in the mud and healed a blind man’s eyes, who had raised Lazarus after he’d been dead for four days, who’d been hailed as king only five days before – Jesus, their friend and hope — had been shamefully nailed to a cross between two thieves.

Saturday found them grieving and appalled, bewildered and dismayed.

When it looks like circumstances have spun out of control, we need to know that God is in control.

When Herod sought to kill Jesus by murdering every male in Bethlehem 2 years old and younger, God was in control and warned Joseph in a dream to take his family safely to Egypt.

When Jesus knew people wanted to make Him king by force, God was in control. He had already appointed that Jesus would be declared king riding a colt into Jerusalem on the very day Jews were selecting their Passover lambs.

Jesus chose to lay down his own life and God had already ordained that it would be on Passover, just as the lambs were being slaughtered.

God was in control at all times over all circumstances, even His death. Especially His death.

Holy Saturday tells us that on days and in seasons when circumstances feel out of control, God is in control.

God’s goodness might be imperceptible, but it is undeniable.

And if we will trust, even in the hardest seasons and on the darkest days, we will see God’s goodness as surely as Sunday’s sunrise.

I'm a recent widow and single mom to seven amazing children, here I share all of the good lessons God is teaching as He is so true and faithful to us. END_OF_DOCUMENT_TOKEN_TO_BE_REPLACED