Yes, I want it!
You are here: Home / Faith Everyday / In Awe of God Yet? God’s Miracles for a Young Teen 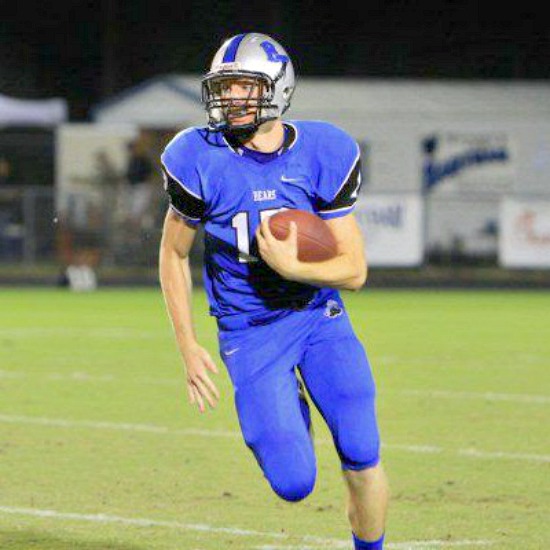 Aubrey, always an outstanding athlete, played quarterback and tight end for his Class 6A high school.

The Greek word for miracle is “simaios,” which means “sign.” Miracles are signs, and like all signs, they are never about themselves; they’re about whatever they are pointing toward. Miracles point to something beyond themselves. But to what? To God himself. That’s the point of miracles — to point us beyond our world to another world. . . Peggy Noonan once wrote that she thought miracles existed “in part as gifts and in part as clues that there is something beyond the flat world we see.” ~ Eric Metaxes, Miracles

It was the third Wednesday of October, the day many high schoolers across the country were taking the PSAT. Aubrey Thompson — a strapping 6’ 4” high school junior, enrolled in a slate of honors and AP classes and a starter in three varsity sports at his Class 6A high school — didn’t have to be at school until noon.

On this crisp fall morning, he set his backpack and lunch bag by the backdoor and hopped into his neighbor’s truck. They met another friend in his car and began to race on a lonely stretch of road near the high school. As the truck reached speeds estimated at 100 miles per hour, the truck flipped, crashed and Aubrey – unbelted — was thrown from the truck.

Aubrey’s mom, Sherri, was teaching her 5th graders at another school in the county. She got a phone call that Aubrey had been in an accident and to come to the ER. Knowing she had to make the hour drive to the hospital, she wasn’t told the nature or severity of the accident.

Driving to the ER, her thoughts racing with fear and what if’s, she began to talk to God.  Aubrey’s very birth had been a miracle. She and her husband, Jim – a former Florida State University offensive tackle — had tried for 10 years to have a child. After years of infertility tests and treatments, they were finally advised to pursue adoption. They did and adopted their first child, Michael, when he was 3 years old.

“I said, ‘Thank you, God. I am content. I have everything I could possibly want,’”  Sherri recalled.

And then, a couple of months later, she realized she might be pregnant. “I had never done a pregnancy test!” Sherri laughed.  Their fertility specialist said it was a miracle given the medical indications. “I had gotten to the point that I wasn’t even asking for a baby anymore and [God] gave him as an extra blessing.” 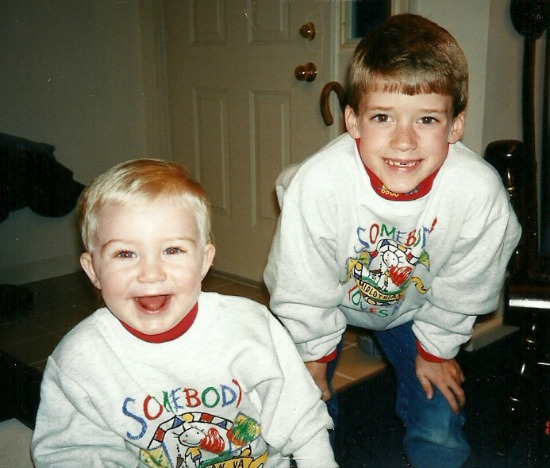 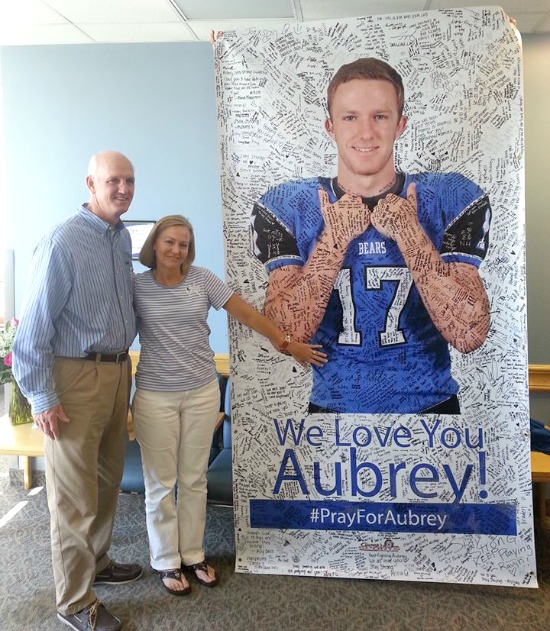 Hundreds of friends visited and prayed as Jim and Sherri spent months at Aubrey’s side in the ICU.

God wasn’t done with miracles in the life of Aubrey Thompson. The first person on the accident scene was a Mayo Clinic nurse who kept Aubrey’s airway open until the emergency crew arrived. Another was the police officer who directs traffic at their church every Sunday.

When Sherri arrived at the ER with Jim, she knew immediately Aubrey’s accident was critical, as more than 20 friends had already gathered to be with them. The two neurosurgeons on call that day gravely reviewed Aubrey’s CT scans. Though they did not tell the parents at that time, they said it looked like the scan of a dead person. Because it appeared that there was no real chance of survival, the neurosurgeons planned tell the Thompsons that Aubrey would be declared dead.

But they never got to that point. Instead, they agreed to put Aubrey on life support for one night and then make a decision. “Keep him on life support because everyone is praying,” Sherri and Jim told the neurosurgeons. The doctors didn’t think Aubrey would make it through the night.

He did survive and over the next weeks and months, the Thompsons daily saw God’s mercy and miracles. While Aubrey had shattered every facial bone, not one of his other bones was broken.  And he could move all of his limbs with no paralysis.

By Day 5, scans were showing good blood flow to the brain. And though Aubrey battled dangerous spikes in brain pressure, fevers and chronic pneumonia, Sherry said she was “going to be bold and ask for the brain to function as it did before the accident.”

As the Thompsons spent days and nights next to Aubrey in the hospital, the community rallied. Hundreds of students gathered at his high school for daily prayer.  Students gathered to pray at schools as far as Texas.  Rival teams prayed for Aubrey and wore his number in games. Teens came to visit and pray with him at the hospital. 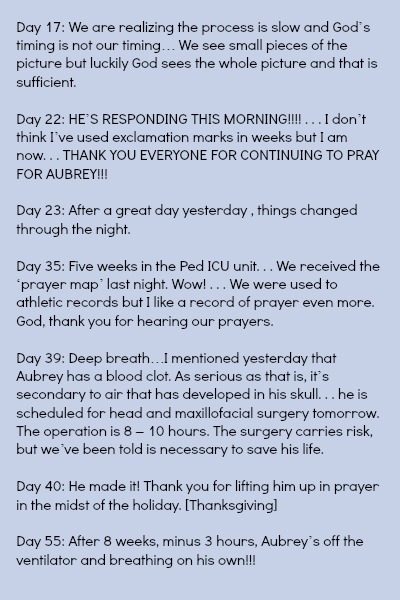 Just as Aubrey reached a point of great progress and stability, the unthinkable happened. Sherri and Jim decided to finally go home to sleep.  During the night, Aubrey aspirated and had to be resuscitated several times through the morning. His oxygen level plummeted, he went back on the ventilator and progress from the long surgery was lost.

“What God does in us while we wait, is as important as what we’re waiting for,” Sherri wrote as they continued hoping for improvement.

She says God gave them enough faith for each day. Though they knew Aubrey was facing months of difficult hurdles, they couldn’t “worry ahead” because God gave them faith for that one day.

Aubrey did improve and transferred to a long-term rehab hospital. He had lost 75 pounds and all memories of the accident and the hospital stay.  Aubrey said when he left with his friends to race on October 16, he thought he’d be home in 15 minutes. He returned home 159 days later, as schoolmates were celebrating spring break. 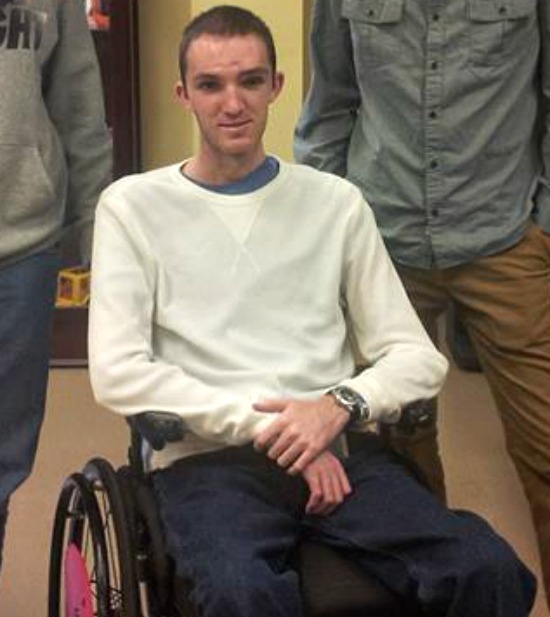 Aubrey had lost almost 75 pounds as he moved to rehab. 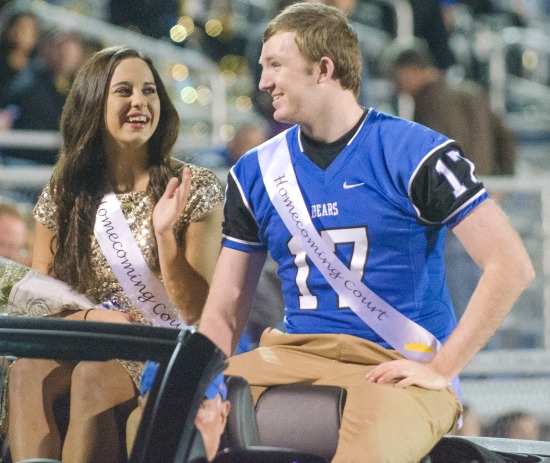 Aubrey, healthy and back in school, on the senior homecoming court

And how is Aubrey today? He has some permanent optic nerve damage in one eye but remains on only one medication. He worked through the summer to catch up on his classes, went to prom and was on the homecoming court. And this week, Aubrey will walk the graduation stage along with his senior class.

His parents said he has never complained and is incredibly positive. “God saved me from this terrible accident, I can honestly say that,” Aubrey says.

“I just can’t imagine somebody going through what he went through and having an attitude like that if it were not for the presence of God in their life,” says his dad, Jim.

And mom Sherri adds this: “One day, I think I’ll say we’re better off for it. That’s my prayer. I do believe it.” 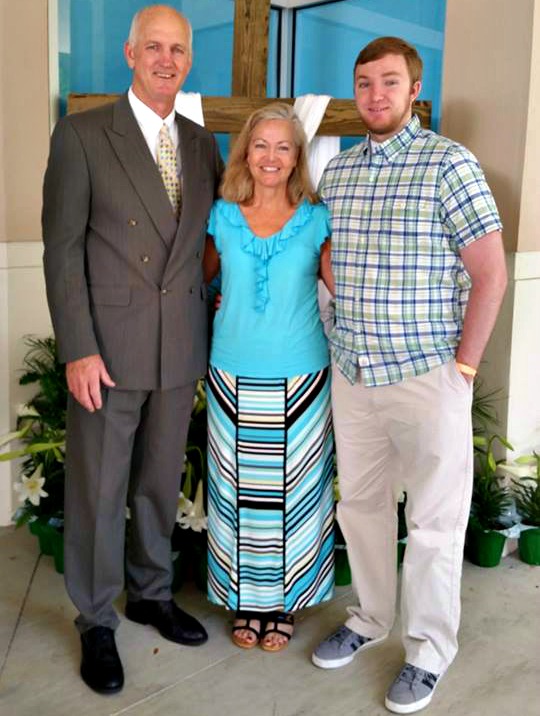 I write to encourage others and tell of God’s goodness. If you’d like to know when new posts are up, subscribe at the top of this page or like the Facebook page. I hope you are encouraged this week!

I'm a recent widow and single mom to seven amazing children, here I share all of the good lessons God is teaching as He is so true and faithful to us. END_OF_DOCUMENT_TOKEN_TO_BE_REPLACED