Yes, I want it!
You are here: Home / Bible Study / The Lord Gives and Takes Away 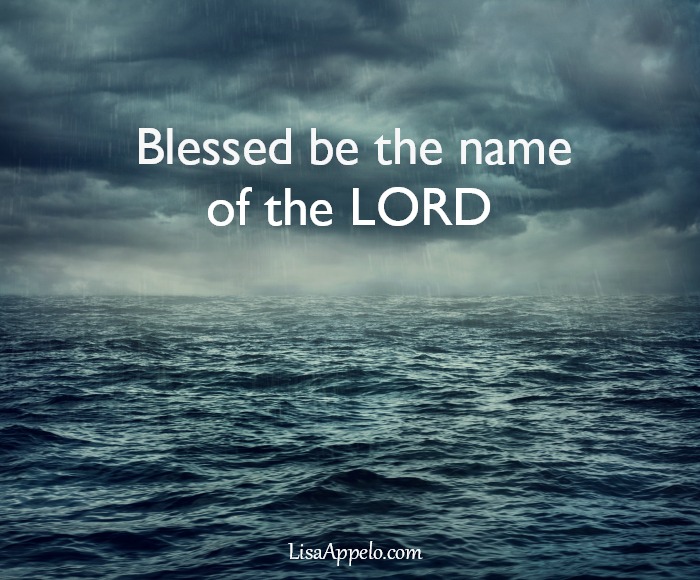 The Lord gives and takes away.

I have to confess those have been difficult words for me to say. Not so much on a Sunday morning, when I’m singing the chorus “Blessed be the Name” in a sanctuary filled with believers and life has been sailing along fairly well.

But to say them when you’re standing among the shards of life as you knew it — and life as you wanted it? It’s admittedly hard to declare in the face of deep loss.

Job declared these words after suffering back to back to back losses. First, a servant came with news that neighboring people had attacked and killed all of his oxen and donkeys as well as the servants tending them. Before he finished speaking, another servant appeared with news that fire from heaven had utterly consumed Job’s flocks of sheep and the servants tending them. While that servant was still speaking, yet another servant appeared, this time with news that other neighboring bands had stolen all of his camels and killed the servants. And if that wasn’t enough, before this servant finished speaking, a fourth appeared, with gut-wrenching news that a mighty wind had come up, destroyed the house where his 10 children were feasting and killed all 10.

Within the space of minutes, Job learned that his livelihood, his wealth and his children were gone.

But Job’s response is also stunning. He arose, tore his robe and shaved his head in expressions of utter grief and then — worshipped God.

I don’t believe Job made this as a glib statement meant to gloss over his devastating loss and raw pain, like tv evangelists beckoning us to paste on a smile and platitudes in deep disappointment.

When life utterly shattered, Job anchored himself in the only true comfort.

Job fixed his hope on God alone and declared his determination to worship God no matter what.

I have to admit, that I’ve always struggled with the thought of God taking. I can nod my head in theological acceptance, but it’s harder to wrap my heart around it in agreement.

I get that a loving God can give. We know that as our Heavenly Father, all good and perfect gifts are from above. God so loved the world that He gave. He tells us to come to Him and ask and He will give us what we need.

But it’s harder to embrace that a loving God could take away.

And yet, I began to think about all that God has taken away.

I saw that God so loves the world that He also takes away.

Blessed be the name of the LORD.

As I thought about this list, I realized how grateful I am that God takes away.

How grateful I am that God so loves you and me that He gives and takes away.

I don’t think my heart will ever truly be able to understand all of it this side of heaven.

But one thing is sure: I don’t want to be a fair-weather worshipper who blesses His name only when He gives.

No matter the circumstance, no matter the news I’m facing or the situation I’m treading, I want to fix my hope on God alone in full trust.

The Lord gives and takes away and in both circumstances we are held by the everlasting arms.

Blessed be the name of the Lord.

I'm a recent widow and single mom to seven amazing children, here I share all of the good lessons God is teaching as He is so true and faithful to us. END_OF_DOCUMENT_TOKEN_TO_BE_REPLACED