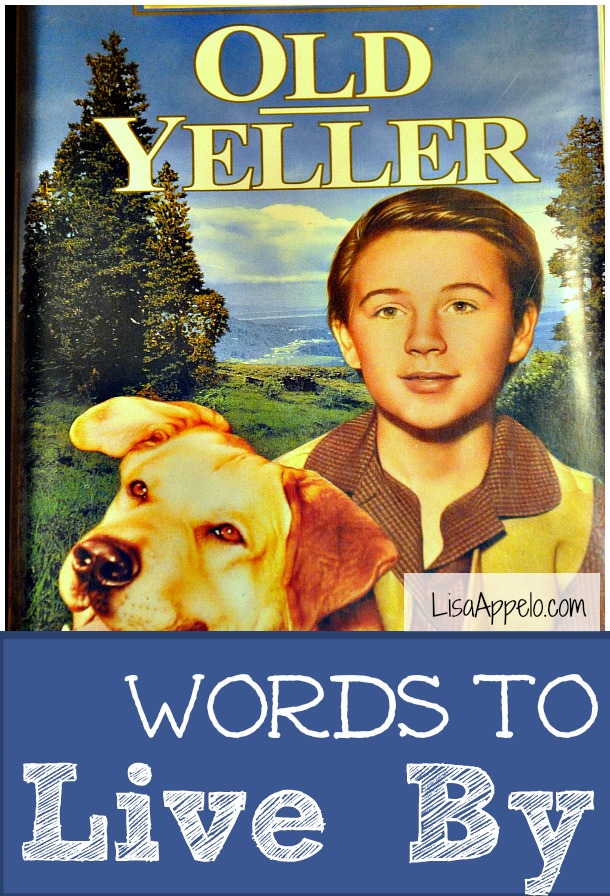 One of our favorite family movies is Old Yeller.  From the time that my oldest could first sit for a movie, we’d pop our cartridge into the VHS and sit for an hour and a half of solid entertainment. In those early years, as chubby fingers held sippy cup and a bag of goldfish, I’d narrate through the movie, anticipating each exciting scene. Ben especially liked all the animal scenes in the movie.

“Do you think that ‘ol dog will keep away from the slab of meat?”

“Look, here’s the fish part! Arliss is going to catch a big fish with his hands!”

“Let’s see if Travis can catch a hog! See him in that tree with his buck knife?”

That movie worked its way into our family expressions. When one of our littles was relaying a tall tale, we’d say he was telling a “big windy.” And we’d often refer to some fevers or sickly behavior as “the hydrophoby” in our best Mr. Searcy twang.

If you’ve never seen Old Yeller (how did that happen?), it’s a classic coming of age story about a boy and his dog. It’s Disney at its best. Set in pioneering Texas in the late 1800s, the Coates family is scraping out a homestead. Fess Parker (of Davy Crockett fame) playing the father, Jim Coates, heads out on a cattle drive, leaving his oldest son, Travis, in charge of the family and farm.

As Travis tries to manage his farm duties, a stray dog keeps giving him problems.  Travis catches this “big, ugly slick-haired yeller dog” with one ear “chewed clear off” chasing his mule and suspects he’s been stealing chickens.

Soon enough though, Old Yeller proves his worth as family protector and endears himself to Travis and the Coates family.  One night, Old Yeller is wounded protecting them against a rabid wolf and eventually, Travis is faced with the horrible task of shooting his own rabid dog. A lot of people get hung up there, but the scene that follows is the high point.

As Travis’ father returns from the cattle drive, he hears how his son rose to the challenge of managing the family and farm.  Jim Coates heads out to talk to his son and finds Travis sitting at Old Yeller’s grave site, angry and sullen and unable to shake the grief of losing his dog.

As they talk, Jim Coates has this for his 15-year-old-boy:

“Now and then, for no good reason a man can figure out, life will just haul off and knock him flat. Slam him again’ the ground so hard it seems like all his insides is busted. But it’s not all like that. A lot of it’s mighty fine. And you can’t afford to waste the good part frettin’ about the bad. That makes it all bad.”

These words resonated with Dan and I. They felt honest and we found ourselves referring to them over the years. We admired the grit it took to bear down and find good again. Although we had never experienced any kind of really hard loss, this advice to push through the hard and go after the good felt like the kind of response we would want for ourselves and for our children.

I think both of us wanted to think that if we ever got slammed “again’ the ground so hard” that our insides seemed busted, we would have hope of finding good again.

In June 2011, Dan and I were enjoying an evening with friends in our living room. As we laughed and talked, the conversation somehow turned to Old Yeller. We discovered they had never seen the movie and, telling them why it was a family favorite and must-see,  we tried to quote the gist of this favorite scene.

One week later, in one of those uncanny turns of life, our family would find ourselves slammed hard against the ground with insides completely raw.  In that same living room with those same friends, I cried and began the task of planning Dan’s funeral service.

In the three years since, in quiet moments, I’ve wondered about the congruity of us naively quoting these words just one week before Dan’s death.

Both Dan and I had felt there was truth buried in those words.  And as hard as Dan’s death had knocked us, I wanted to be able to grieve fully, working really hard to find the good again. It takes time to move through grief and it’s not light work. But I’m so grateful for the hope that despite the hardest of times, there is still so much good in life.  These are wise words as we work to intentionally {re}build family and find joy and rhythm and laughter in our days.

Click here to read the other posts that are part of the 31 Days to {re}building family or subscribe at the top  of the page.

I'm a recent widow and single mom to seven amazing children, here I share all of the good lessons God is teaching as He is so true and faithful to us. END_OF_DOCUMENT_TOKEN_TO_BE_REPLACED