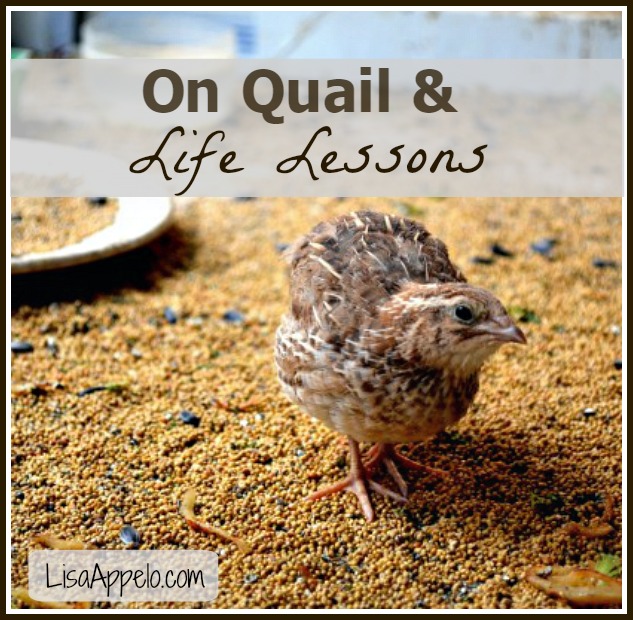 As a homeschooling family, we’ve had several memorable projects over the years. One of my favorites is the year we opted to put aside the structured science texts and let the kids pursue delight-directed activities.  Each of the older kids chose an area they were interested in and Dan and I helped direct their learning.

Rachel, in 3rd grade, read all about vegetable gardening and planned, built and planted a square foot kitchen garden. Nick was in 2nd grade and introduced our family to chickens.  I remember the kids studying and circling the Murray McMurray catalog like it was the Sears Christmas edition.  Nick ordered a baker’s dozen of assorted one-day-old chicks, which were delivered one afternoon in a vented cardboard box.

Ben, in 5th grade, decided to raise quail. We lived in an area known for Southern bobwhite quail and one morning the whole family trekked out to a private land preserve to meet with a biologist who worked in quail conservation. We toured the farm and as we left, he gave Ben about two dozen quail eggs. Our suburban adventure began. 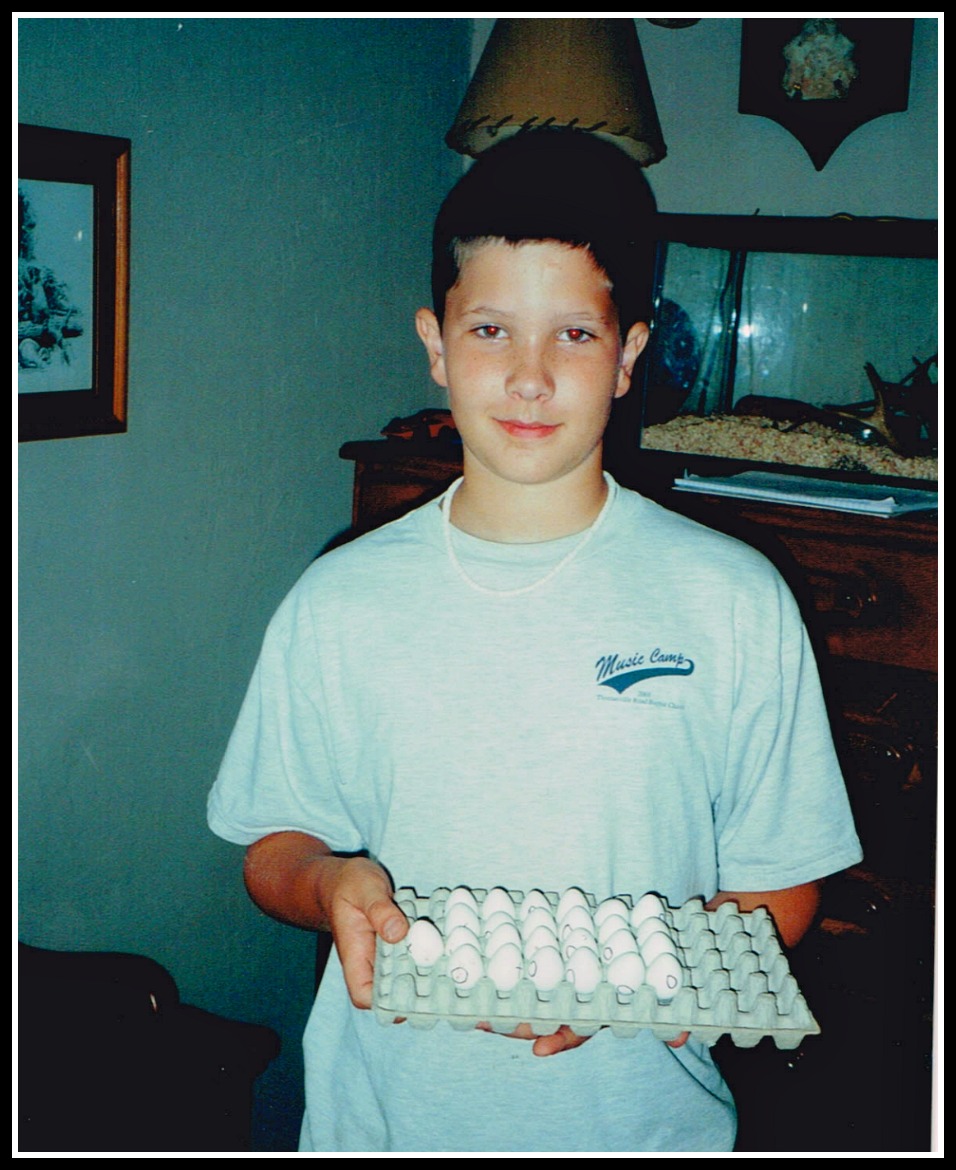 We stopped at a local hardware store on the way home for an incubator and supplies. And then for the next three weeks, Ben turned the eggs twice a day, candled the eggs to make sure they were fertilized (they were) and journaled their progress every day. Sure enough, about day 23, the chicks began to slowly, slowly peck their way out of the shells.

First the egg would wiggle, then the point of a small beak would appear and after several tedious hours, the chicks worked themselves free. 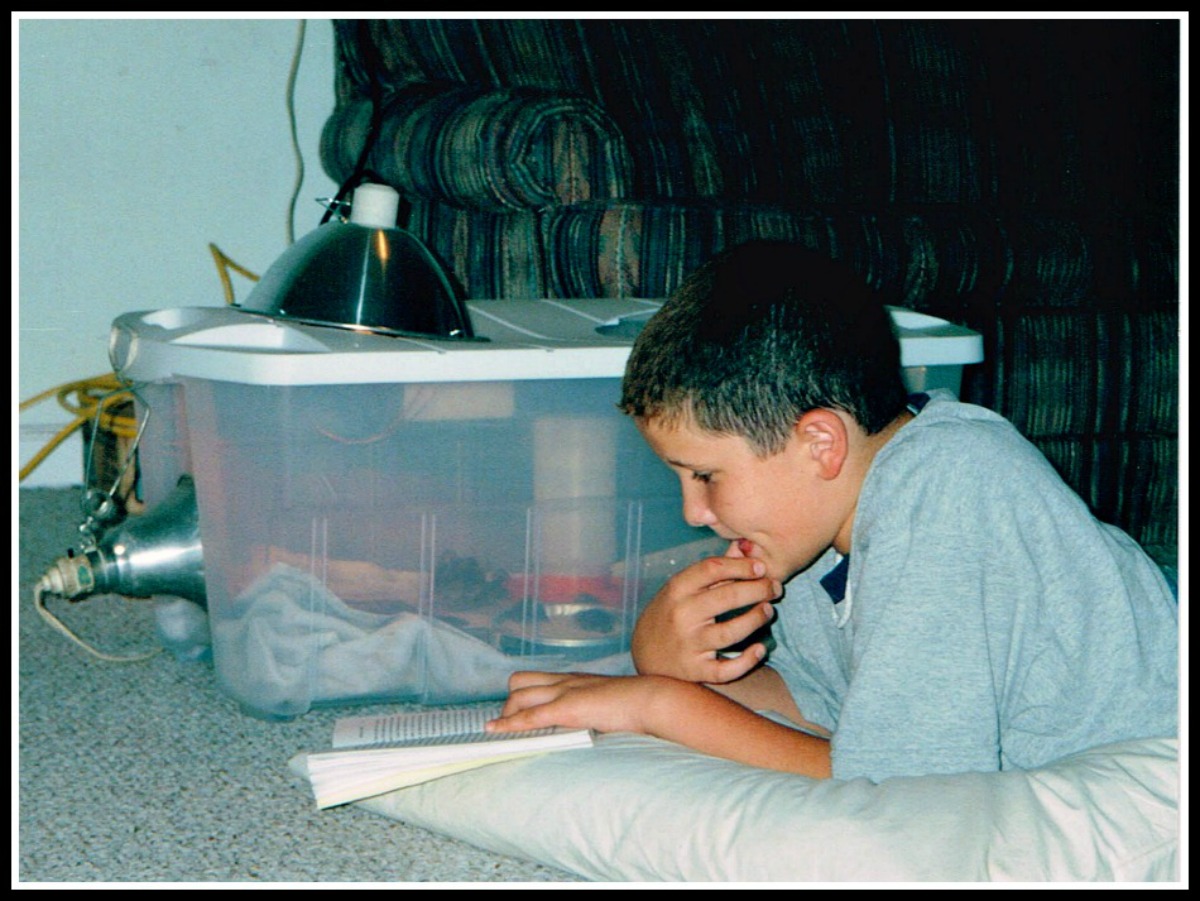 As each chick hatched through the night, Ben moved them to a brooder that he and Dan had made from a plastic bin with a heat lamp. For the first week, he slept in the playroom right next to the brooder, hoping that as the chicks watched him they would imprint. He wanted a covey of chicks that would follow him around the yard!

One day, when the chicks were a few weeks old, they began pecking at one particular chick’s feet.  Over and over again that day, no matter what we did, all of the quail would gang up on that one chick, pecking at his feet until he was so injured we finally had to move him into a separate box. Unfortunately, the chick was so weakened that it died.

Strangely, after we moved the battered chick out, the quail began to single out another chick and do the very same thing. It was horrible to watch all the quail pecking at their fellow chick.  We moved that one out too but they began pecking away another’s feet.  We could see that this was going to be a vicious cycle and we had to find a solution.

Ben was visibly upset at what was happening with his quail. He had hand-raised these quail, taken loving care of them for weeks and now they were aggressively turning on each other. 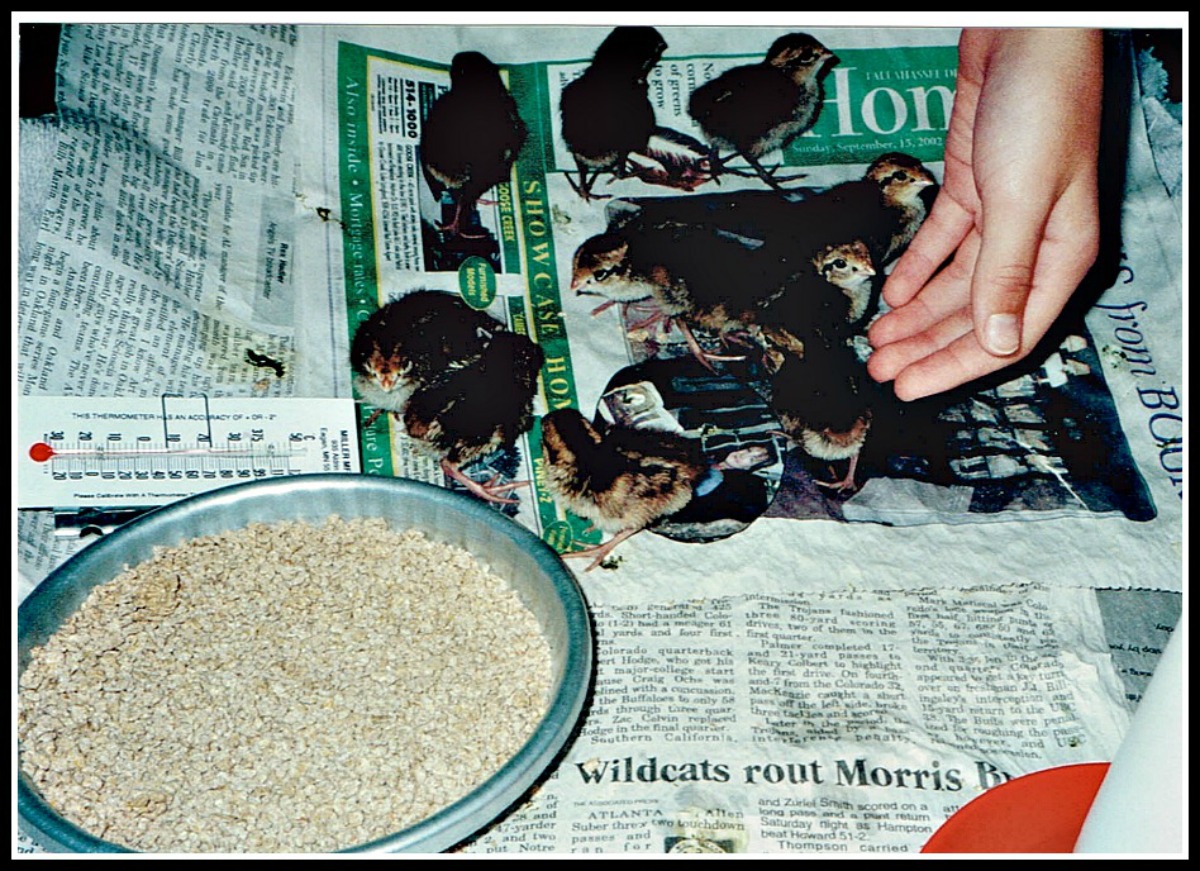 In desperation, Ben called the biologist who had given him the eggs and learned that the quail needed protein – specifically crickets. We piled into the car that evening and drove way out to a tackle shop, bought a canister of crickets and hurried home. As soon as Ben put the crickets in the box, the quail delightfully went after the crickets and the pecking at the other quail stopped.

One day, several weeks later, there was some pretty ugly pecking going on in our own family. I reminded the kids of how sad they had felt when the quail were pecking and hurting the other quail and as we talked I felt pretty good about such a teachable moment.

And then the Lord struck me with that same lesson. Doesn’t that happen in parenting? You’re correcting a child and as the words are coming out of your mouth you can hear the Lord sowing it straight to your own heart.

Just as Ben had felt when his little covey of  hand-raised quail were pecking at each other, and just as I felt as a parent when my kids were being ugly to each other, I got a picture of how God must feel when His children peck at and injure each other.

The entire law is summed up in a single command. “Love your neighbor as yourself.” If you keep on biting and devouring each other, watch out or you will be destroyed by each other.

As God usually does, He struck me with the very lesson I was trying to teach my kids. Those quail did end of flourishing (so long as we kept a steady supply of crickets) and Ben went on to raise several generations.

I'm a recent widow and single mom to seven amazing children, here I share all of the good lessons God is teaching as He is so true and faithful to us. END_OF_DOCUMENT_TOKEN_TO_BE_REPLACED