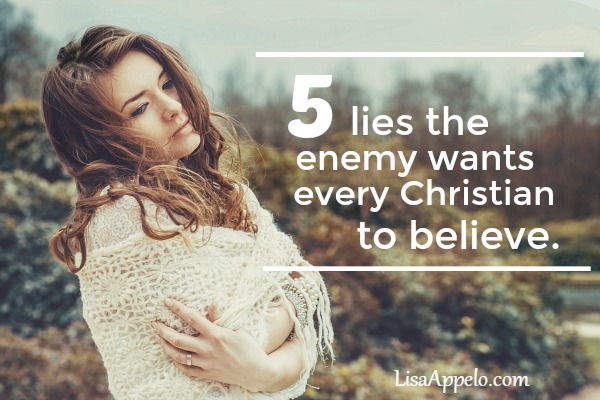 It’s an age-old battle with strategies as old as time. Most enemies wield weapons that you can see – weapons like guns or knives or even their bare fist.

But not this enemy. His weapons are more subtle. We don’t always see Satan coming nor do we always recognize when he’s drawn his weapon on us.

In fact, while I’m busy wrangling children and meeting work deadlines and coordinating this weekend’s schedule, it’s easy to forget that there’s a battle raging against me – and for me.

The enemy’s age-old weapon? Lies. While the styles, languages and technology have completely changed through the course of history, Satan’s weapons have not. He’s the Father of lies and after all these years, he still uses the same ones. Genesis 3 shows us five lies that can get us every time.

“Now the serpent was more cunning than any beast of the field which the LORD God had made. And he said to the woman, ‘Has God indeed said….’” Ge 3:1 (emphasis added)

Right off the bat, Satan took a swing at the authority of God’s Word. He stirred up doubt where there had been none. Why? Because God’s word is the believer’s offense! Satan knows that God’s Word is alive and active and has the power to defeat him. (Eph 6:17) If he can get us to doubt God’s Word, he can win.

But if we’re going to defeat Satan, we need to know what God has said, that His word is our authority, and that we can trust it.

Every bit of God’s creation was good because God is good. His goodness is part of His divine character. God had made man in his image, given him woman as a helper and placed them in the most lushly planted, perfectly watered, easily tended garden ever. The fingerprints of God’s goodness surrounded them day and night.

But when Satan twisted God’s Word, he cast doubt on God’s goodness. Why would a good God withhold something that appeared so pleasing?

Satan still uses this lie. When we are waiting for something – a new job, a pregnancy, a spouse – we’re tempted to question God’s goodness. And when we’re going through difficulty, we can also doubt God’s goodness. But God’s goodness is unquestionable. “O give thanks to the LORD, for He is good; For His lovingkindness is everlasting.” 1 Chron 16:34

3. The lie that God isn’t generous.

“And he said to the woman, ‘Has God indeed said you shall not eat of every tree in the garden?’” Ge 3:1 (emphasis added)

At this point, Satan moved from insinuation to out and out fabrication. God had given Adam and Eve every single tree in the garden for food except one. In fact, God had told Adam, “You are free to eat from any tree in the garden” except the tree of the knowledge of good and evil.

Satan paints God as a God of scarcity when He is actually a God of generosity. “And my God shall supply all your need according to His riches in glory by Christ Jesus.” Phil 4:19 If we see God as a God of scarcity, we’ll miss the blessings He’s given that are all around us and instead, clutch our money, things and people tightly without trusting our generous God.

4. The lie that sin has no consequences.

“…but God did say, ‘You must not eat fruit from the tree that is in the middle of the garden, and you must not touch it, or you will die.’

How Satan would love to convince us that we don’t have to worry about consequences for our sin. That a little sin won’t matter, that no one will find out, that others are getting away with it, that we’re under grace anyway.

But Eve and Adam would soon find out how deceitful Satan was. Sin always leads to death and destruction (Eph 2:8). And sin has consequences even for believers under grace. “Do not be deceived, God is not mocked; for whatever a man sows, that he will also reap.” Gal 6:8.

“For God knows that in the day you eat of it your eyes will be opened, and you will be like God, knowing good and evil.” Ge 3:5 (emphasis added)

If Satan cannot convince us there is no God, he will try to convince us we can be God. He’ll feed us the lie that we can steer our own ship, we can determine what’s right and wrong, we can define our own fate. Awaken the god in you, the New Age beckons. The divine is in all of us, it teaches, if we can only become conscious of it.

Well, there’s no need for redemption or a Redeemer if we are already like God. And putting ourselves in the place of God is idolatry. The Bible tells us there is only one true God. ”I am the Lord, and there is no other; apart from me there is no God.” Isaiah 45:5.

Satan may be crafty, but he is not creative.

The same five lies he lobbed at Eve are some of the same lies he continues to use today. But we are not defenseless. We too have weapons of divine power and an age-old winning strategy: first, we need to call out Satan’s lie for what it is and then, we need to take it captive and make it obedient to the truth of Christ. (2 Cor 10:3-5)

I'm a recent widow and single mom to seven amazing children, here I share all of the good lessons God is teaching as He is so true and faithful to us. END_OF_DOCUMENT_TOKEN_TO_BE_REPLACED